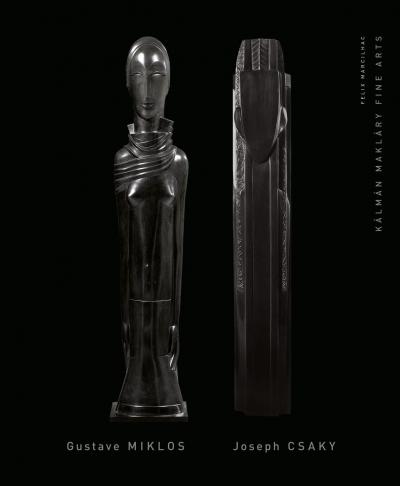 Here was a man, who lived in Paris between the two world wars and like many other young Hungarian artists of the time, he wanted a more international artistic horizon, which is why armed with this solid academic foundation, he left for Paris in 109 where he met one of his colleagues from the School of Applied Arts, Joseph Csaky, who had settled in Paris, not without difficulty the year before. They occupied one of the studios in the Ruche for a few month and remained close friends despite being of very different character.

Gustave Miklos took part with great success in many of the artistic movements of the period, as well as participating in most of the annual exhibitions organised by the various artists’ societes. He collaborated on the Exposition internationale des Arts décoratifs et industriels modernes of 1925 presenting two magnificent lacquered wood totems; he was approached in 1928 by one of the most renowned galleries of the time in order to present a most sensational solo exhibition that would garner raving reviews in contemporary art journals at the same time executing several commissions specifically for Jacques Doucet; the following year he became one of the founding members of the Union des Artistes Modernes (U.A.M.) and later realised in 1937 two large - scale bas - reliefs for the entrance to the group’s pavilon at the Exposition internationale des Arts et des techniques dans la vie moderne; finally, after 1940, he retired to a small provincial town in the Jura all but giving up the production and exhibition of works in a sort of artistic suicide in order to devote himself almost exclusively to the teaching of industrial design at an industrial school in Oyonnax.

The critics and collectors would pretty much forget about him after 1945 to the extent that very few even noted his death in 1967. However a rather feeble attempt at bringing him back before the public was attempted as early as 1961 at the Musée des Arts décoratifs de Paris, as part of an exhibition devoted to Jacques Doucet and then again in the exhibition Les années 1925 at the same museum in 1966. Despite being low-key these rediscoveries did not escape the notice of everyone and certain enthusiasts of the Art Deco style would take their passion one step further by organising an exhibition under Miklos’ name at the L’Enseigne du Cerceau in 1972, eventually followed in 1983 by a proper retrospective mounted at the Centre Culturel Aragon in his adopted town of Oyonnax, an exhibition that cemented the success of his artistic resurrection. After that many Parisian galleries, such as that of Marc Lamouric or the the Galerie Vallois presented Gustave Miklos’ works, and at the same time at auctions the prices paid for his graphic and sculpted works inexorably increased. Once again Paris worshipped Gustave Miklos through the graphic divinities he had found a way to represent, and architectural sculptures of an extraordinary modernity.

Even if life had been hard and unjust for him, his paintings, sculptures and decorative works, along with his teaching enjoyed the recognition of French art world again.

This book takes a journey through Joseph Csaky’s career too as Felix Marcilhac examines the artist as the defender of historical cubism.

Joseph Csaky was among the most important sculptors of early 20th-century Paris. The artist’s work of this time is marked by a Cubist understanding of space, with planes transformed into abstract architectonic forms. Csáky’s sculptural interpretation of the Cubist painting of Pablo Picasso and Georges Braque is characterized by elements borrowed from non-Western sculpture, the integration of armature and open space, and the rhythmic use of geometry.

Joseph Csaky was from the the beginning of his career one of those artists who undertook most successfully the application of its rules to sculpture. If the cubist ethos guided him throught his life nevertheless took care to ensure that it did not become a system that constrained him. Refusing to empty art of its spiritual content and believing that beauty was to be found in the expression of an idea rather than the representation of beings and objects, Csaky invented his own formal rules, which he continued to develop over more than 60 years of artistic activity. Thus dressing the masses of his sculptures in cubist clothing Csaky expresses a new approach to volume, which creates an organic unity between form and space by the permeating of the two each other. The human figure thus becomes a mere pretext for the ordering, development and articulation of autonomous volumes among themselves. Despite these geometric transpositions the subject represented remains perfectly interpretable, and if the innermost content of the work rises to the surface revealing the sadness of person portrayed. Convinced that the deep significance of art lay in its ability to glorify a collective ideology Joseph Csaky worked for over 60 years to give expression to the sculptural rules of his time. Strongly influenced by his cubist experience his own sensitivity drove him to reconnect with the artists of Ancient Greece and the Romanesque period. His sculptures respond to a social need, their meaning is logical, easy to understand and open to all. They are made to be contemplated and pondered on a universal scale. (Felix Marcilhac)

Csáky participated in some of the most important exhibitions of avant-garde art in Paris, including those at the Société nationale des beaux-arts (1910–11), the Salon de la Section d’Or (1911), the “Cubist Room” of the Salon d’Automne (1911, 1912), and the Salon des Indépendants (1912). The Salon des Indépendants transpired in Paris from 20 March to 16 May 1912. This massive exhibition occurred exactly one year after Metzinger, Gleizes, Le Fauconnier, Delaunay, Léger and Laurencin were shown together in Room 41 of the 1911 Salon des Indépendants, which provoked the scandal out of which Cubism emerged and spread throughout Paris. His work was later shown in group exhibitions at the Galerie Léonce Rosenberg, Paris (1921); Palais des beaux-arts, Brussels (1940); Musée de Bordeaux, Paris (1973); and Musée Bourdelle, Paris (1977). Csáky’s solo exhibitions include those at the Kulturális Kapcsolatok Intézete, Budapest (1959); Musée Rodin, Paris (1980); and Musée d’art moderne, Troyes (1986).