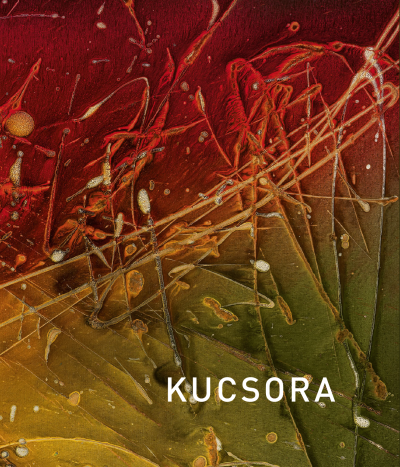 The dynamics of aleatory (in lieu of a foreword)

In 1937, Lee Krasner, one of the key figures of American Abstract Expressionism, created a painting. Based on an anecdote, her mentor – Hans Hofmann – made the following infamous comment on it: “This is so good you wouldn’t know it was done by a woman.”

Similar to Krasner’s work, Márta Kucsora’s compositions preserve the instinctive nature of gestural painters. They offer the imprint of a blocky dreamworld organised around an internal rhythm and utterly dismiss the idea of revealing the sex, age, or ethnicity of the creator. The actual subject matter of Kucsora’s non-figurative paintings can only be gleaned exclusively from the process of their creation – the performance of the very act of painting. In her paintings, the associative web ties forms to ever more new meanings, even though none of it is the end product of deductive logic. On the contrary, these works are entities of random effects; they are the products of a visceral struggle with the material. It would be pointless to try to solve the chain of internal contradictions between the component elements and the motifs of various states of existence. Vision, spatial and temporal perception – these traditional means are insufficient to navigate these paintings. We are cast adrift, entirely at the mercy of unbearably slow or inconceivably fast passages of time in nature. We travel through internal landscapes, lacking any semblance of an anchor, as everything is in motion, undergoing transformation and change.

The organic structure and fundamental biological essence of Márta Kucsora’s paintings are striking. We feel as if her works were communicating a miniature metaphysical event, born of the tension of matter that is frozen in time and then liquefied in turn. They seem to be continuously rewriting themselves, evoking the surrealist technique of decalcomania, écriture automatique or the chemigrams that became popular in the 1950s in the field of subjectless photography. Reminiscent of thickening mulberry jam, colour pigments crystallize in certain spots into geological structures, or turn into lava flows, bearing the signs of physical processes that come into being via deliberate or random dialectic, as a result of a peculiar “trial and error”methodology. We find ourselves in an experimental lab, a kitchen with chemical concoctions. Kucsora is cooking up a secret recipe, mixing up paints of varied density and viscosity, painting mediums, pastes, lacquers and gelatins, spraying, sprinkling these more or less diluted materials onto the completely dry or moistened canvas. Her choice depends on whether she wants the final product to bear the marks of the operation of physical laws on surface tension, or instead, the depiction of the dominance of centripetal or centrifugal forces. When we encounter the artist’s action paintings, the impression is that of an explosion of layer upon layer of paint, constrained within the four-sided, enclosed visual field. The layers coalesce into geological formations, high mountain ridges and deep chasms. The painting’s seeming sculpturesque quality is merely an illusion, however. The consistency of materials, their drying times, how they mix with one another, as well as the direction of the paints that were added with the spray gun, none of these things changes the morphology of the plane that is the artwork. Contrary to her contemporaries with a similar mindset, artists who use similar mediums (e.g. Pat Steir), instead of patterns taken from art history or spiritual-philosophical references, Márta Kucsora is focused on the depiction of the aesthetic moment, encoded into temporal processes and the cycles of nature and life. Among her visual inspirations, we can find photographs of exotic forests, waterfalls, or stormy beaches, all taken on trips to Bretagne, the United Kingdom, or the west coast of the United States, as well as dreamlike images experienced as interstellar flickers of precognition; the colors and motifs here unconsciously and consciously shape the origin stories of the accidentally created paintings par-excellence. Directed randomness plays a paradigmatic role in the creation of Kucsora’s paintings, resulting in a strange interplay of cognitive functions and intuitive senses; this can be best compared to the cerebellum, which independently ensures the even contraction of voluntary muscles. In 1890, it was the psychologist William James who first coined the moniker “cerebralist” for those artists who strive to combine the sensual, spiritual, physical, and intellectual. Based on genealogy, technique and the sensory experience her paintings communicate, perhaps we are not mistaken when we perceive in Márta Kucsora a successor to the artistic approach that is characteristic of cerebralists.