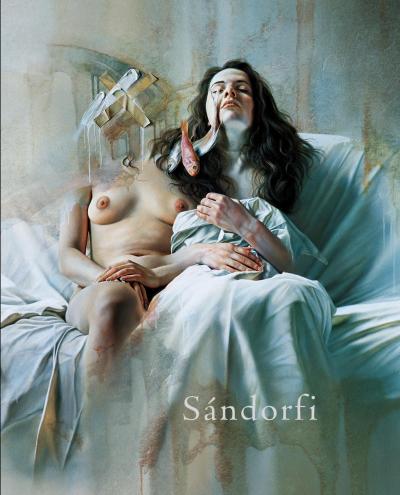 István Sándorfi, also known as Étienne Sandorfi, was a naturalised French painter of Hungarian origin. He received his formal art education at École nationale supérieure des Beaux-Arts and at École nationale supérieure des arts décoratifs in Paris. He mastered what art critics now term hyperrealism. But he did so with his very own blend of surreal elements. Having been introduced to oil painting at the age of 12, Sandorfi dedicated much of his life to perfecting his painting techniques in order to achieve the photoreal and at the same time pull the carpet away under the viewer by letting part of a person disappear in thin air. At the age of 17, he had his first individual exhibition at a small gallery in Paris. After his second exhibition, in 1966, he gave up drawing to devote himself exclusively to painting. In 1973 Sandorfi had his first significant exhibition, at the Museum of Modern Art in Paris. Exhibitions were to follow in France, Germany, Belgium and finally the United States. Sandorfi passed away in 2007.

While numerous exhibition catalogues and a book have all focused on different periods of his oeuvre, none has yet attempted to present his work up to now in its entirety: this is the first publication that covers all of the painter’s periods to date.

In 2006, Kálmán Makláry had the honour of organising at the Erdész & Makláry Fine Arts Gallery in Budapest the first exhibition of his works in Hungary, 50 years after he left his native country. That exhibition aroused the interest of both the general public and the professional art world, which is why, half a year after Sandorfi’s first Hungarian exhibition, the first retrospective of his work in Hungary has been organised at the MODEM, one of the country’s most beautiful museums of modern and contemporary art. This occasion helped inspire us to collect together reproductions of the most significant works from the whole of the artist’s career and present his life’s work, from the first periods to the most recent, in book as well.

With its book on István Sándofi, the publisher Maklary Artworks continues in its mission to help the general public in Hungary and other countries to discover or re-discover those Hungarian artists who live or lived in Paris through a series of exhibitions and publications outlining their careers.