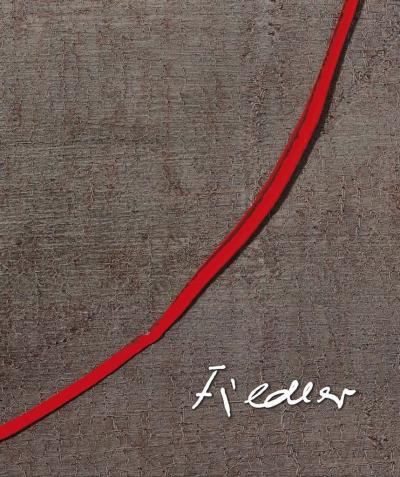 Francois Fiedler’s oeuvre can be linked to the “second”, post-war School of Paris. His lyrical abstract, Tachist paintings stand in a meditative kinship to the parallel art pactices and compositions of European Art Informel and the New York School. Although Fiedler, a child prodigy, participated regularly in exhibitions from his early teens, he remained a withdrawn and introverted artist throughout his life. Just like other Hungarian artists, Fiedler left his native country, an increasingly isolated Hungary, at the end of the 1940s, and chose France as his new homeland. A few years after his arrival, owing to Joan Miró’s patronage and recommendation, he met Aimé Maeght, one of the major art dealers of the era, who noticed the young Hungarian painter’s talent and look him into his confidence. Fiedler, in turn, proved to be a loyal friend, who continued working exclusively with his gallery throughout his entire life, even after Maeght death. In 1951 as an accompaniment to the joint exhibition of Wassily Kandinsky and Albert Giacometti shown in Saint-Paul-de Vence,Maeght presented Saul Steinberg, Pierre Tal-Coat,Pablo Palazuelo, Eduardo Chillida and Ellsworth Kelly, as well as Fiedler, as the latest talents. From that point on, his works were regularly featured alongside those by major artists of 20th-century modern art such as Braque, Chagall, Calder, Chillida, Giacometti, Kandinsky, Miró, Matisse,Picasso, Riopelle and Tápies.

The present publication includes a large number of reproductions with enlarged details, which are meant to show the unbelievably delicate fragments that constitute the paintings’ structure and create their unity as a whole, and which would otherwise remain invisible due to the original dimensions of the paintings. The enlargements also afford an insight into the artist’s technique, rendering visible the exciting microcosmic world of an inimitably supreme and beautiful texture.