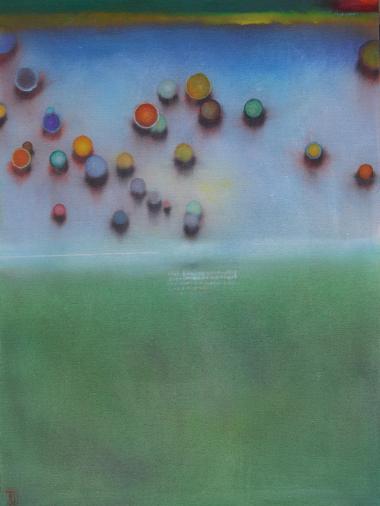 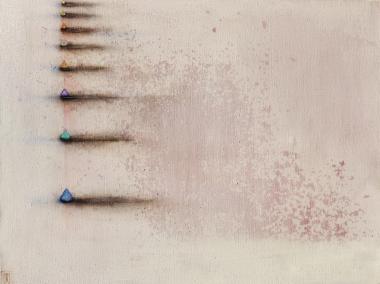 Born in Massachusetts in 1955. After completing studies in philosophy (aesthetics and metaphysics), he came to Europe where he completed studies at the Künstakademie in Vienna.
He has painted throughout the world, improvising his atelier in the worker hotels of Istanbul and Prague, in Scottish farms and Bangkok high-rises. Private studies with the painter Zao Wou Ki, long discussions with the painter Sam Francis, and thirty plus years of walks in the city of light have all been major influences.
The French Cultural Ministry has given him a lifetime studio in the heart of Paris, a few metro stops from the ‘Ile de la Cité’ and Notre-Dame. His implantation in France puts him in contact with writers, painters, actors and musicians from France and all around the world.
His life and work have been the subject of a documentary film for the French Centre National de Recherche Scientifique. He has lived and worked in Paris since 1982.
Biographical information that, although not format-worthy, may have a pertinence to your perception and appreciation of his work.
1. Strange jobs: night watchman at the Gardner Museum, Boston (Rembrandt and Vermeer studies by flashlight !), taxi driver on a single-road island, piano player in bars all around the world.


2. Best advice: from Zao Wou Ki, 'Il faut que vous vous perdiez' ('You must get more lost' or perhaps he just meant 'Get lost') and 'Breadth not depth' from Sam Francis, who always seemed worried about Tim going off the deep end.

3. Travels: 24 countries in 3 continents, lots of planes and trains, many shows, a few master classes and a couple of memorable hotels, but also more than 50,000 kilometers of hitch-hiking, some of it above the Arctic Circle. Tim has slept outdoors with nothing between him and the stars nearly everywhere.

4. Best deal ever made: traded the full packet of his life model drawings in Vienna for a train ticket to Paris. In retrospect Tim adds 'It's clear that the drawings were downright poor and that the trip has been quite good'.

5. Greatest gift ever received: empty math pads Tim's dad would take home on Friday after his week as a math teacher. They enabled Tim to do drawings for years without worrying about running out of paper.

Artworks of Tim Smith are available at the Kálmán Makláry Fine Arts.