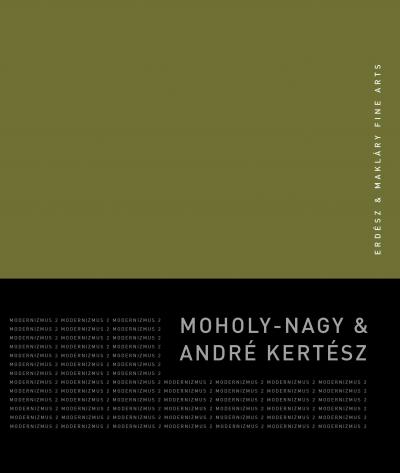 This catalogue was published alongside with the Moholy Nagy / André Kertész exhibition at the Erdész & Maklary Fine Arts gallery in 2007. This publication serves for the representation of the internationally recognized avantgarde and modernist artist with Hungarian origins.

There are only a few Hungarian artists in art history, who gained a world wide recognition and being continuously represented across the globe until today. László Moholy Nagy is one of them. His artworks could be found at the collections of the Guggenheim Museum or the MoMA in New York City, the Tate Modern in London and the Centre Pompidou in Paris as well as many of the significant private collections all over the world. Moholy Nagy was one of the most versatile artists of modern art: he was a painter, photographer, publicist, film maker and establisher of modern typography.

In this catalogue our gallery represents another extraordinary modern artist, André Kertész, who is one of the most well known photographers of all time. The humanist, lyrical and subjective elements could be perceived on all of his works. He was able to capture the aura and the atmosphere of the people and the environment on his photos.

This catalogue represents a selection of artworks of Moholy Nagy from the 1920’s to the 1960’s and photographs of André Kertész mostly from the 1930’s.