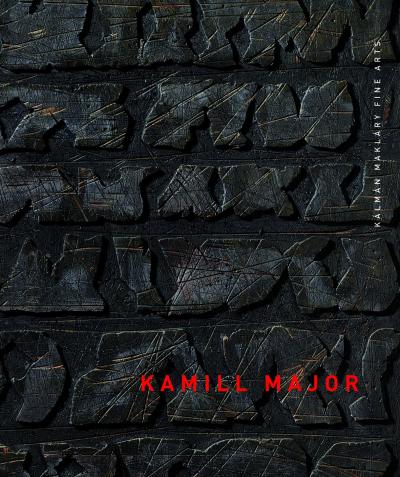 Kamill Major is a Hungarian-born visual artist who moved to France for more than forty years before, and has lived in Paris for many years now, and is now in the southern part of France in a small village in Gard.  He is a French/Hungarian abstract painter from the second Post War School of Paris. While the frame of his studio inspired him to geometric painting, his walking around the melancholy Pere Lachaise inspired photography and focused his attention on cemeteries, investigating traces of time and weather, vandalism. Traces and fractures that give a new life in a strange and intense way of eternal tranquility. Thus he was born into a double art, which is only two aspects of the same problem-destruction, is actually a creative act.

In 1972, after spending two years in Budapest, he definitely left his country. He arrived in Paris and enrolled at the Ecole Nationale Supérieure des Arts Décoratifs de Paris (Paris School of Decorative Arts) where he became a teacher in 1981. Enthusiastic and curious, eager to exchange experiences and impressions about life and art, he set out to meet the artists whose work he esteemed, considering this to be the best school. A strong friendship - a real artistic complicity - established itself with painter Simon Hantai and sculptor Vera Székely.

Kamill Major has never become an entirely nonfigurative painter. He was doubtlessly immersed in the last big wave of abstraction in his formative years, and he took along with him this vein of painting when he left for Western Europe.

He also paints in parallel with his graphic works. He is exploring the metamorphosis between black and white, color and colorless, full and empty; the eternal transformation of the material, so by presenting the remnants of the human body, written and engraved texts, exploring the impermanence of human culture and the boundaries of memory. With the means of desertion, he tries to create a sense of immortality, to make the moment of ceasing and to present eternal constancy. According to some of his arguments, the key words of his work are melancholy and nostalgia, others read a rather encouraging message of the existence beyond life in his works.

The art historian, Géza Perneczky wrote: “...Kamil Major has managed to integrate himself perfectly into France. Moreover, he also kept re-shaping and re-building his environment, perhaps exactly because he did not feel really at home anywhere. While he doubtlessly respected the standards he was surrounded by outside his homeland, he remained a sovereign master of his own life. Eventually, he succeeded in living a life that corresponded with his own expectations, without being forced to make compromises.”