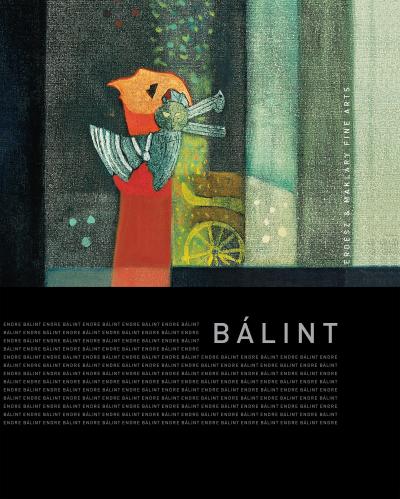 Endre Bálint is one of the most enigmantic artists of our time. Mystery is one of the clues to Bálint’s multi-faceted character. Every line, trace and form in his art is a personal confession. One of the problems with interpreting his work lies in the fact that Bálint frequently uses different forms of expression in order to relate to us what he has discovered about himself and the world around him. Sematically expressed, Bálint tried to pinpoint the secrets, explanation and meaning of his existence. He was born in 1914 into the sort of intellectual family that predestined him to the extraordinary artistic career that could only have been his. His family and circle of friends taught him to think constantly about things and to question himself and the world. The Bálint  household was one of the centres of the Hungarian literary and artistic renaissance. His father was in charge of the cultural column at the progressive journal Nyugat, whose editor- in- chief was Bálint’s uncle. Ernő Osváth. Naturally, Bálint’s intellectual development was influenced by this exceptional atmosphere rather than directly affected by it. Originally Bálint did not set out to be an artist- he first enrolled in the College of Applied Arts. The need to express himself artistically only arose later, after he met such charismatic figues as the artists Lajos Kassák, Lajos Vajda, and Pál Justus.

This edition takes us through  on this unique oeuvre. This peculiarity can perhaps be explained by the facts that artist didn’t merely draw and paint his life, but also lived with great intensity. Suffering and joy, mourning and humour have perhaps never come together in such harmony and, at the same time, such exceptional variety.