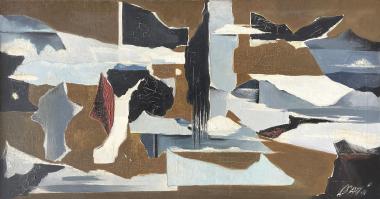 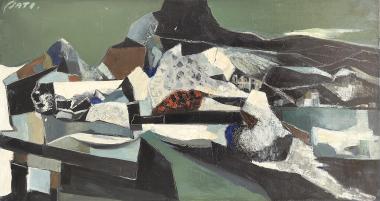 Georges CSATÓ (1910-1983) wonderfully manifests the post-war avant-garde spirit. He was fortunate enough to encounter at an early age some of the great cultural figures of the twentieth century. He grew up in Budapest  and studied at the École des Beaux Arts in Vienna in 1929, then in Berlin with Archipenko, Kollwitz, Feininger and Klee. With the rise of the Nazi party, Csató left Germany for Prague along with several like minded avant-garde artists escaping the prevailing cultural tyranny in Germany, including Oskar Kokoschka with whom he worked from 1936-1938. With the advance of the Nazi’s, he returned to Budapest, where he soon found himself in a labour camp. He survived a series of extraordinary ordeals including escaping, fighting with the partisans, being captured by the Russians, and taken to a secluded location and made to paint a portrait of Stalin. “While I was sketching him he never spoke a single word, he just sat there chain smoking. The only movement he made was to push a bottle of vodka and a packet of cigarettes across the table to me.”

When the war was finally over Csató returned to Budapest and took up his paintbrush again, but Hungary fell under Stalinist government and abstract painting was strictly prohibited, so he left and arrived in Paris as a refugee where he would live for the rest of his life.

Csató’s bold provocative work was well received in Paris and in 1948 Jean Cocteau organised an exhibition for him at the Librairie Paul Morihien. He soon became established amongst the Parisian avant-garde, and participated in the more radical salons such as the Salon des Réalités Nouvelles, and the Salon Comparaisons, and held many acclaimed exhibitions, notably: Galerie Silvagni, 1951; Galerie de Berri, 1954; Galerie Furstenberg, 1956; Galerie Mariac, 1959; Galerie di Meo, 1962. By the 1970’s he achieved international acclaim, exhibiting successfully in London, New York, Sydney, Melbourne, Amsterdam, Bonn, and Canada.