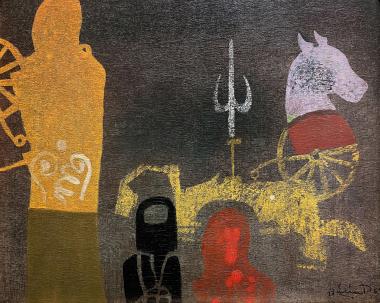 Besides a few years he spent in Paris, he lived in Budapest. He studied as a graphic artist for commercials, but he became interested in painting towards the end of his studies. He became the member of the art group in Szentendre led by Dezső Korniss and Lajos Vajda. He became the head of the Social Democrat Party’s Decoration Department and the head of the Department of the Workers Party’s Cultural Association of Visual Arts. He was the establishing member of the European School. He published a series of books describing his memories, which are important sources of the art scene of his era.

Endre Bálint was influenced by expressionism and surrealism.

The unstable and distracted compositions constricted among strong and dark contours are very expressive and reflects the inspiration of the art of Béla Czóbel (Szobám Bindorferéknál, 1937).

The misery of war reflects on his expressive powerful gestures besides the continuity of the old tendencies.

The 1947 surrealist exhibition of Paris had a huge impact on his art. On the inner landscapes fragments of childhood memories and nostalgic scenes can be perceived, combined with frightening mythical, dream-like creatures like leprechauns, goblins, and anthropomorphic beings to form an indescribable story. Later on, he started to mount his pictures together while his typical motives appear: nameplate with a horsehead, wheel shape, fragments of Swabian and Arabic women (Falu éjjel, 1954). He paints his most important works from 1959: Vándorlegény útrakél (1959), Csodálatos halászat (1960), Népligeti álom (1960), Itt már jártam valaha I-II. (1960).